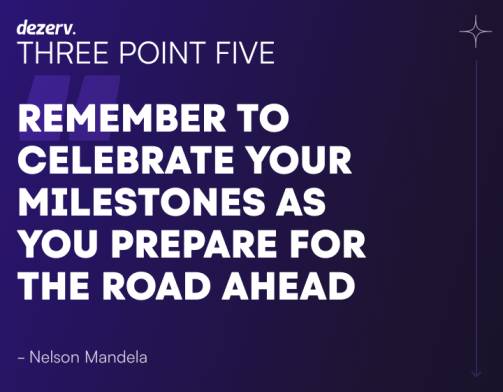 A milestone is an important event in the history of development. As we welcome a bright new year, here we take a look at some recent breakthroughs achieved.
Scroll down to find out our take on them.

TikTok, the popular short video sharing platform, has surpassed the tech giant Google as the most popular website of the year, says a report. Until last year, it was only ranked 8th.

It has been gathering a lot of attention from the businesses lately, with the marketing teams specifically assigning a budget to Tiktok campaigns.

With such a diverse set of content, people use it for different reasons — they’re looking to connect, laugh, find feel-good stories, and inadvertently, to shop- whether they know it consciously or not.

‍The secret behind this global rise

- Its recommendation system ‘For You’, uses a different approach as compared to others like Facebook. It sends content suggestions that may be different from users’ interests to let them explore new creators and categories

It will definitely inspire other tech innovators from emerging markets to venture out too. And eventually, this trend will create a fuller range of digital offerings globally for consumers and businesses.

The long-awaited successor to the Hubble Space Telescope, James Webb was finally launched on Christmas eve.

One hundred times as powerful as the predecessor, Webb will help us peer at some of the oldest galaxies in the universe, search for signs of habitability and study mysterious forces like dark energy.

‍Planning for the telescope began in 1996 with a financial estimate of USD 1 billion and it was supposed to be launched in 2010.

Launch was delayed by 11 long years with the budget shooting to USD 10 billion.

‍- An independent review in 2010 found that the program wasn’t going to meet its cost and scheduled deadlines, and there were a lot of management issues

- In 2018, there was human error when the inspector, instead of carefully auditing, blindly relied on the technician’s word that the wiring was done correctly

- In 2021, telescope's name was called into question because James Webb, the scientist after whom it was named, had a prior political involvement in an issue revolving around LGBT community

‍Hubble is aged and has already faced technical issues twice recently. If the Webb mission fails and Hubble stops working, we might be left without a major space telescope for a while, even after spending such a mammoth amount and time.

Some management lessons for the scientists here — how to weigh the returns on capital while keeping the time value of money in mind. Also, the importance of a plan B, if in case plan A doesn’t work.

The world economic output is set to exceed the USD 100 trillion mark for the first time in 2022, two years before the previous forecast, as per the report from Centre for Economics and Business Research.

Also, the same report estimates that India is set to overtake France next year and then Britain in 2023 to regain its place as the world's sixth biggest economy.

‍The continued economic recovery from Covid will drive the growth, but the emergence of Omicron is a reminder that the pandemic is still a threat.

In the past few months, “human actions” and “state budgets” were two important aspects that decided the path of economic retrieval for many nations. And economists should surely account for these while making the projections.

There's more to it

‍- Of the 7.1% upward revision to the level of nominal dollar GDP forecast for 2022 only 2.2% will be accounted for by higher real GDP. The remaining 4.9% is inflation in dollar terms

- The scientists said 2022 could set a new record for global emissions, driven by the expected increase in oil consumption

‍Currently, the governments and companies are striving hard towards attaining the growth numbers.

However, we as investors should look beyond these projected forecasts and think from a more comprehensive perspective of inclusiveness, sustainability and human behavior to build up the probable scenarios while making decisions.

In the 7th episode of Insider Investing, tune in to learn how the next gen is denominating things in Bitcoin terms, new age careers overshadowing traditionally coveted jobs and the increasing polarity in the post-social world.

Don't miss our take on the evolving regulatory restrictions, the Hotel California Problem, and how to invest your money in 2022 to achieve your long term goals.

Wish you all many new milestones in the times to come!