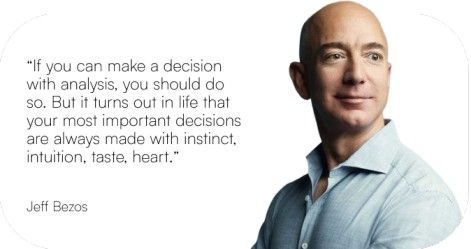 There are defining moments in our life when we stand at crossroads wondering how to move forward. A few such tough decisions caught our eye this week. Before you read on if you are facing tough money decisions, tweet your questions and tag @dezervHQ, and our experts will answer them for you.

The U.S. economy is in the paroxysm of what’s been called the Great Resignation: workers are quitting their jobs at the highest levels on record. Consequently, the job openings have outnumbered the number of unemployed workers in a host of industries.

‍A record 4.3 million U.S. workers quit their jobs in Aug'21— a figure that expands to 20 million if measured back to Apr'21. Not just this, as per a recent survey, more than 40% of the global workforce is ready to resign at some point this year.

- A desire to maximize liberty by decreasing the interference from others
- Vast stimulus checks have raised the savings of the US households, giving them the courage to make such decisions
- Pandemic reflections to follow their own passions over chasing salaries in the daily grind

Employers need to rework talent strategies and bring that to the center of the business. Data allows organisations to focus on problems and seek out reasons for attrition. Investors also need to build a better understanding of the impact of talent on the business. How companies do on this score will impact their stock performance.

US Treasury Secretary Jenet Yellen has proposed a tax on unrealized capital gains of the billionaires. This new tax law targets the narrowest ever group of people — those above USD 1 billion in assets or those who earned more than USD 100 million for three consecutive years.

The Secretary’s viewpoint is clear: billionaires pay much less tax as a percentage of their income relative to the American middle classes. Also, the ultrawealthy can theoretically completely avoid taxes by holding on to assets till they die. And if they need money, they use what is now a popular strategy apparently: “buy, borrow and die”.

- The unequal footing that capital gains enjoy against income, makes the rich structure their wealth to manipulate tax system
- Since capital gains are taxable only when realized, people hold assets over their lifetime, creating economic inefficiencies
- The step up basis of tax calculation on inherited assets, leads to loss of tax revenue for the government

This may be one of the most ill-conceived pieces of tax legislation. While the popular appeal is easy to understand, what is not is the inability of policy wonks to see the first and second order implications of this. What happens with illiquid assets? If a company’s stock price goes up, does the founder have to sell ownership to pay the tax? These are just a few of the unanswered questions.

Recent reports suggest that EA Sports and FIFA have decided to part ways. This separation comes after three decades of growing revenues and success that created one of the biggest gaming giants in the industry. The core of the dispute revolved around money and exclusivity of rights.

For EA, sales of the game have surpassed USD 20 billion over the past two decades and FIFA earned USD 150 million per year through the licensing rights. EA FIFA has been the highest-selling video game franchise in history, with 325 million copies as compared to the next competitor, Konami, which has sold 111 million copies.

- Take away the FIFA license,  EA Sports still has over 300 other licensing deals with clubs, leagues and players, which should preserve the familiar look and feel of the game
- FIFA is looking to build an ecosystem with various stakeholders: developers, investors and analysts, to create a long-term view of the gaming, e-sports and entertainment

This break-up could mean well for the gamers. EA sports would do its best to retain the consumers while if FIFA lends its name to other companies, it could mean more competition and innovation among developers, which in turn could lead to more choices, better gaming products and lower prices.

Managing money is one of the important aspects for our lives and all of us know it comes with some big and small decisions to be taken every now and then. At dezerv., the Integrated Portfolio ApproachTM that combines human expertise and scientific models, makes these decisions for your portfolios.

This season may you be spoilt for choice! Happy Diwali