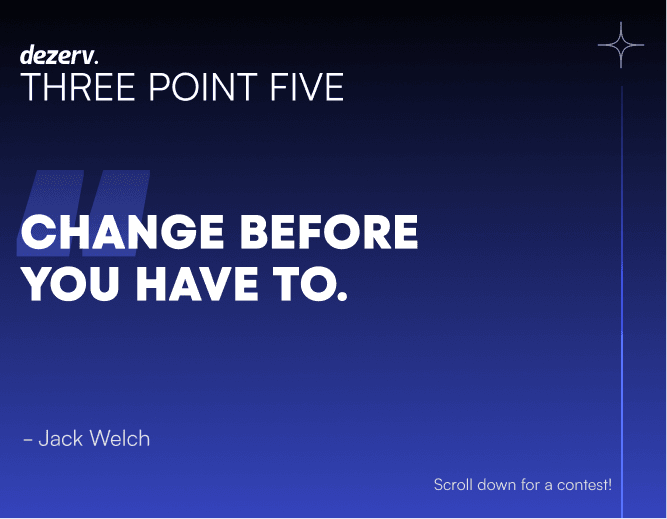 Change is a must-have for experimenting and growing. Be it our personal lives, careers, or businesses — we all go through constant transitions. This week we look at the latest proposed edits in three different arenas.

Last week, Twitter announced that it had been working on an edit button since 2021 and would test it out with a pool of users who signed up for the paid subscription, Twitter Blue.

The announcement comes after Elon Musk conducted two polls on Twitter. As per the polls, 70% of people believed that Twitter does not adhere to the free speech principle and 74% voted in favor of an "edit" button.

What are others doing?

‍Different social media platforms have different ways to let the users edit once posted. Facebook shows the edit history and what all was edited. LinkedIn just shows that the post is an edited one and Instagram allows to edit only the caption, not the pictures.

However, Facebook’s editing feature has been abused in the past, in one case giving rise to a huge cryptocurrency scam too!

‍-Tracks changes, the way Word document lets us do it through strikethroughs so that user can see what all was changed

‍Twitter's past user data can help to figure out which edit scenarios are the most pressing ones and which ones can have repercussions. As per data, fake tweets spread six times faster than truthful ones and the most viral fake posts were of political nature.

The edit feature will have different use cases. Some good players might genuinely want to rectify the typos and other bad players might spread misinformation. This design problem has to be carefully solved — it could be a make or break moment for the platform.

Australia has been the hotbed for the BNPL industry with 20 players, a market worth USD 14 billion, and an estimated growth rate of 72% in 2022. But things have changed lately due to the rising interest rates, increase in the cost of living, and intensifying competition.

For the players, it has led to steep losses, which now reflect in their share prices too. After-pay, the largest Australian BNPL player is down by 50% in the past year. Meanwhile, consumer groups and investors have been calling for regulation of the industry.

Looking at the trends

‍As per the data from Choice, 30% of Australians have used BNPL services in the past year. A noteworthy point is that 21% have used it for essentials like food and rentals. 15% have missed the payment, and 78% of those have then experienced financial hardship like taking an additional loan or forgoing essential items.

The main reason behind the pick-up in BNPL could be that it is very easily accessible as the industry is too loosely regulated.

Some proposed changes in BNPL globally

- Clear communication regarding the purposes for which BNPL is unsuitable, consequences of failing to pay on time, and more

‍While regulating the industry is the first step required, it is also important to change the perception of users and educate them on when and to what extent BNPL should be used.

For investors, it might be good if the businesses reposition the BNPL offering as a complementary customer acquisition tool and extend services only to the existing users with a good credit history.

India is the third biggest consumer of processed food with sales volumes of 34 million tonnes. Also, around 25% of the Indian population is at risk of obesity, diabetes, and hypertension. No doubt that these two facts are interlinked.

A lot of people make uninformed eating choices. And maybe the brands also don't try to draw the consumer's attention towards the nutritional contents and how healthy their product is.

‍It is alarming that as per a 2020 study of 1,306 product samples across 36 food categories, none of the samples adhered to FSSAI’s permissible limits for salt, sugar, and fat.

Currently, most of the food companies print nutrition details on the back of the package, which does not get the attention of the consumers. With new regulations, these should be changed.

‍How are others doing it?

‍- Health Stars: Australia and New Zealand present it through a star system, with half a star for something with no nutritional value, all the way up to five stars for the healthiest available

- Big Three: In the USA, using a simple table, the content of sodium, sugar, and saturated fat is spelled out along with the daily requirements

- Nutriscore: Europe calculates a combined score with all the nutritional information of the product (A through E, with A being the healthiest)

‍For brands, labeling might seem to be a small detail but it does have a huge role to play when it comes to winning consumers' trust. Many brands in the past have faced product recalls due to labeling errors, causing financial implications too.

India not only needs fair labeling but also the promotion of the right nutrition and food literacy. It will help the consumers decipher which food is good for them and make educated purchase decisions.