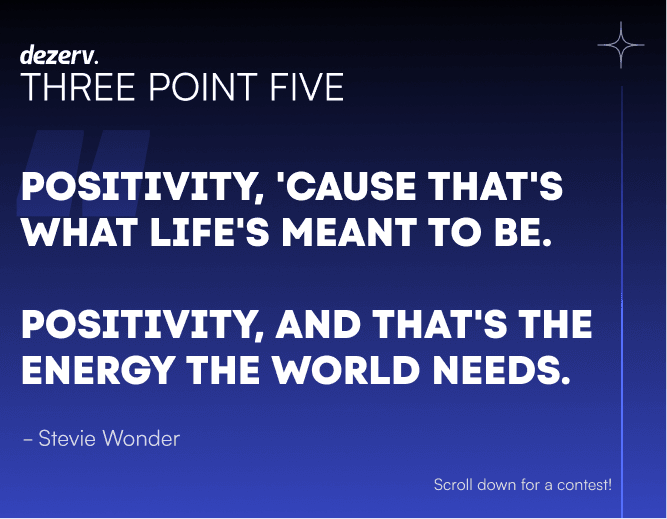 While there is always a lot going on around, we can choose to look at the bright side. Positive news triggers “good mood” after all. This week, we raise a toast to three such admiring story pieces.

Finland was crowned as the world’s happiest country, five times in a row now. Other spots in the top ten were taken by North European countries. The US bagged 16th spot, India was at 136th, and Afghanistan was the unhappiest (unsurprisingly!).

The scoring covers a blend of economic and qualitative factors such as GDP, social support, community-based trust, generosity, freedom to make choices, and the like.

These countries were also better at handling the pandemic—there were 27 deaths per 100,000 people in Nordic countries until 2021, as compared to 80 in the rest of Western Europe.

- Strengths: India projects a GDP growth rate of 9.2% in FY22 - the fastest in the world! We also witnessed a 22% jump in the score of life expectancy. This was driven mainly by improvements in sanitation and literacy towards cleanliness

- Areas of improvement: India did not score well in social support—meaning lack of trust. India also faces significant inequality in opportunities. The top 10% own 65% of total wealth and the share of female labor income is just 18%

‍In terms of economic growth, India currently is the 2nd most developing nation, after China. However, the overall prosperity also constitutes the quality of life, where India still has a long way to go.

Finland can be a good inspiration. Its continued investment in improving the education system and governance has led to the well-being of the citizens. Not to mention, contributions by employers and citizens played a great role too!

LinkedIn recently made it easier to represent career breaks in a positive way on the profiles. The dropdown menu now gives the option of designations like full-time parenting, travel, a gap year, or other reasons.

This feature will encourage an open discussion between candidates and recruiters about time spent away from the workplace. Life experiences and skills built, while on a break, can sometimes match what employers are looking for.

What rang the bell?

‍These programs began in the finance sector 20 years back, as a way to correct the gender imbalances. By 2015, the tech sector also got into the act. Today 34% of the Fortune 50 have their in-house return-to-work programs, with a conversion rate over 80%.

More recently, the parental duties during the pandemic forced more than 1.8 million women and 1.7 million men to leave the workforce. Further, with the great resignation wave, globally many unhappy employees decided to take a break.

- 56% of employees say they acquired new skills, or improved existing ones, during a career break

For employers, this could be a great talent pool to acquire and also give assurance to the existing employees that careers might not be linear and their life choices are valued.

The plan has identified six core areas ranging from urban flooding, air quality, greening, and biodiversity. The course of action on how to achieve these during the short, medium, and long term has been laid down.

Need of the hour

‍Various recent extreme weather disasters in Maharashtra, such as cyclones, floods, and untimely rains, have created the need of implementing localised mitigation and resilience techniques.

If nothing is done, sea-level rise alone could cost Mumbai USD 162 billion per year by 2050 and disproportionately harm the city’s poor, many of whom live in slums and fishing villages that hug the coastline.

What more could be done?

‍- Campaigns in the local language that reach the maximum number of people, arm them with information and how can they contribute

- More urban towns nearby can be mapped out. A city being overcrowded has a direct impact on the environment

- In addition to disaster management, also focusing on disaster preparedness and creating a sustainable ecosystem in the long run

‍Mumbai has set the right precedent for other cities to take lessons and come up with action plans as per their local climate needs. After all, neighbouring cities will influence each other's air quality and overall environment.

National-level supervision to integrate the local plans of different cities so as to meet India's net-zero goal by 2070 will be helpful.

Here’s to celebrating the good things around!